I am the baby boomer in our little trio. I am a granddaughter of immigrants, making me ¾ Swedish and ¼ Dutch. I am the second of four children to Tillie and Mel (1st generation Americans). I am mother to one girl and two boys, and Oma to one boy and two girls. I am a wife of 47 years who dearly loves the sweet man that I married. I am the human version of mom to a blonde, curly haired, 75 pound dog who likes to attach himself to my leg to better keep track of me. I am half of the couple who likes to see cows grazing out in the pasture and beef in the freezer…the half that can totally separate those two notions in her mind. I am happy.

I grew up in the desert heat of Tucson leading a Leave-It-To-Beaver life. The school year was September through June for everyone. Each school day began with the whole classroom standing to salute the flag and saying the Pledge of Allegiance. Math was just math. In the summertime kids ran the neighborhood streets after dark playing Run Sheep Run and Kick the Can until our father’s whistle called us home. Milk was delivered to your doorstep in glass bottles with an inch of cream on the top, which was used in the parent’s coffee or shaken into the milk. Tomatoes were so juicy and flavorful that we would take a saltshaker and the tomato out in the yard, sprinkling salt over each bite and letting the juice run down our chins. Swimming was done at the local public pool where you might get an ear infection, but, oh well. It was an idyllic childhood.

My adult life has been spent in California where I went to school, met my sweetheart, married and raised a family. We felt very lucky to raise our children in a rural setting even though it was different from either of our upbringings. Here friends were imported from town instead of gathering on the neighborhood street corner. Games were still played after dark in the summertime, but then in the pasture where my daughter now informs me wild animals could have been lurking. All in all, I think we did a pretty good job of raising three amazing people who grew up and moved away. Moving away was NOT part of the plan. Especially to three different states! Needless to say, a lot of time is spent driving or flying to see our kids and grandkids.

Jennifer, my eldest and a kindred spirit, and I really enjoy spending time together so we travel often between Arkansas and California. Recently a long time dream of ours came to fruition with the publication of our first book. It was harder than I anticipated. But my daughter and I were writing, cooking, photographing, and book designing together, or at a great distance, and having a blast. When we received our advance copies we were so excited we danced a jig together via Facetime! During the whole process I was in my comfort zone.

Our time to bask in the sun was short lived. Next came the marketing. My daughter called me and said we needed to start working on a blog and get set up on Pinterest and Instagram. My heart began to race, my hands began to shake, and I wailed, “Jen, I don’t know how to do any of that stuff. I don’t even know what some of it is!” Definitely out of my comfort zone now. She calmly replied, “I know Mom, I freaked out at first too. But, we will learn and it will be ok.” What I quickly learned was that my first-born, type A, daughter would handle most of the tech set-up details and I could stick with writing, photography and cooking. I breathed a huge sigh of relief. This is good.

Of the many things in life that I love to do is anything that includes my sister, Shirlei, and Jennifer. Together we can somehow turn tedium into fun. We are our own cheerleaders, sometimes leaving our husbands shaking their heads in wonderment. Shirlei was always willing to bounce around ideas or make suggestions while Jen and I were writing Memoirs of a Delicious Life, however, her full-time job excused her from further involvement. But, without too much arm-twisting, she is joining us in this current venture.

So here I am, teaming up on this project with two amazing women, hoping to hold up my end of the bargain by making contributions to our new blog. Yep, we are doing this. And even though my technological skills are sometime lacking…they promise to be gentle with me. 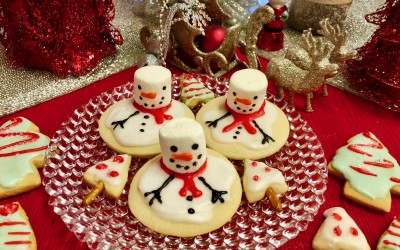 Merry, Merry Christmas Friends, Family and Readers!  From our family to yours we wish you peace, happiness and love this Christmas Day. If I could share some Christmas cookies with you all I would!  This year I made Melting Snowmen from Sugar Cookies (these little... 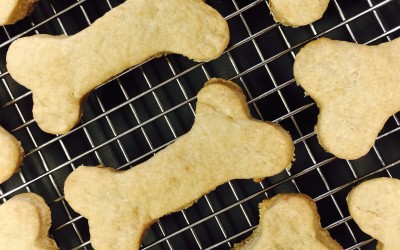 Treats For Your Pooch

If you want to have something special for your doggy under the Christmas tree or give a well thought gift to a friend with a beloved four-legged creature of the canine variety, these dog bones will be an instant hit. I have been making them for our dogs over the years... 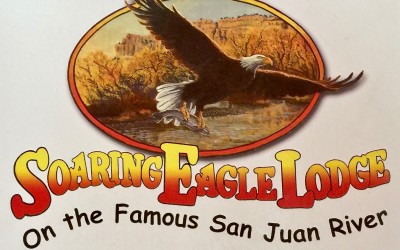 My brother, Jim, is an avid fly fisherman. Since my husband also enjoys this pastime he asked Jim for suggestions of a new place to try. Jim suggested Soaring Eagle Lodge, owned and operated by Jeff Massey, and situated on the San Juan River in Blanco, New Mexico.... 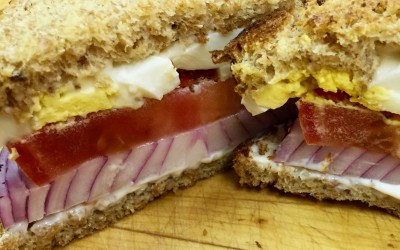 Hard-boiled eggs.  My husband loves them, therefore there are always a few resting in the frig amongst their uncooked siblings.  To easily tell the difference you place the egg, side down, on a smooth service, and give it a spin.  Cooked spins really fast, uncooked... 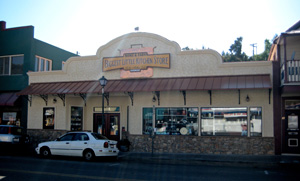 A Most Favorite Kitchen Store

There is a little kitchen store in Jackson, California that is a favorite with moms, cooks, and anyone that just enjoys being around nice people and pretty things.  Located in the heart of California’s Gold Country, with its own wealth of history and scenic...

Good Times at the Book Festival

March 11 and 12 found Jen, Shirlei, and I at the spectacular event known as the Tucson Festival of Books.  A sea of about 500 tents were set up on the University of Arizona campus mall and upwards of 130,000 people came for part or all of the two days.  This is the...
« Older Entries
Next Entries »
error: Content is protected !!