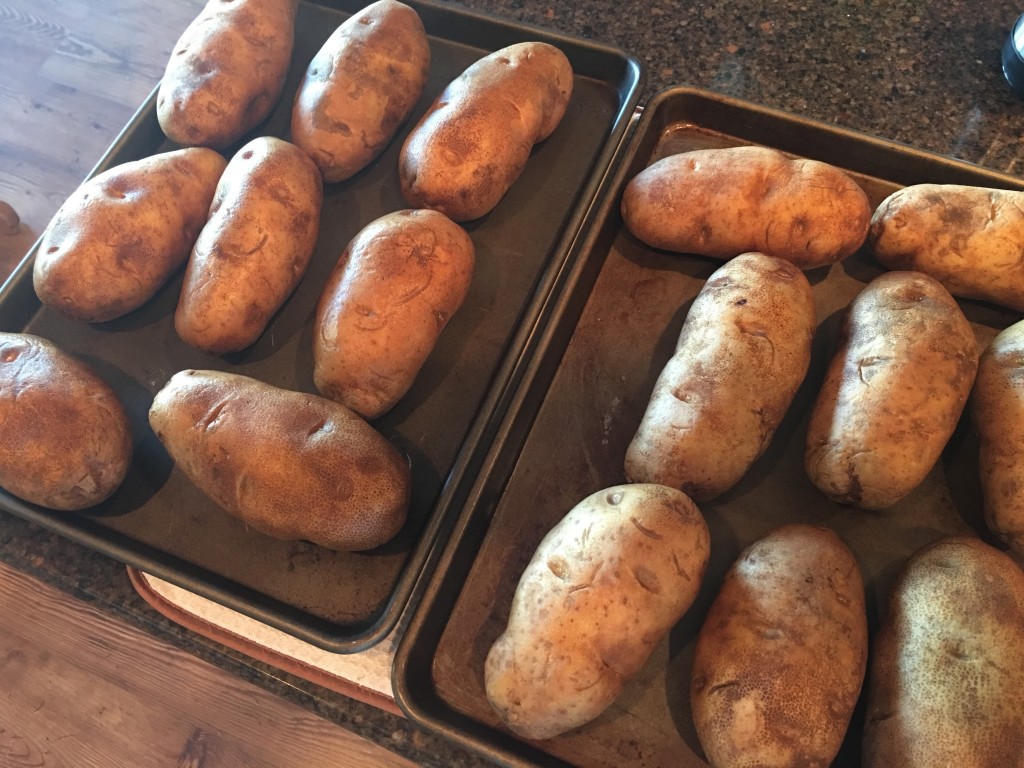 My husband and I enjoy a good barbeque. You know, the kind where you throw some sort of beast on the grill and then add some side dishes and good friends. The food is tasty, the drinks flow, and the friendships deepen. My kind of a good time.

The side dishes often vary widely and usually include some combination of chips and dip or salsa, fresh fruit, vegetable salads, green salads, pasta salads, and the perennial favorite, potato salad. Now my family has had some great potato salad makers, including my mom who added mustard and black olives to her salad. My sister’s salad includes red onions. But my husband’s potato salad is my current favorite.

He discovered it at a little mom-and-pop barbeque place in Amado, Arizona, called BK’s Outlaw Barbeque. Unfortunately, BK’s is now closed but their potato salad lives on.

The first time that hubby brought the salad to an event I kept asking him where the salad was. He kept pointing at the table and saying, “It’s right over there.” Well, to my consternation I was convinced that this famous potato salad had been consumed before I could have a taste it. Oh well. What I did find right over there, however, was this delicious, warm, cheesy, bacon-y, potato-y ambrosia.

What I thought was some sort of scalloped potato dish was, in fact, the famous BKs “potato salad”. I was a little bit confused by the name of the dish, as I was familiar with “regular” potato salad that was served cold, and with German potato salad that is warm with a sort of vinegar-y dressing. This potato heaven was something new altogether and I was anxious to pick it apart so that we could make it at home.

Our investigation and experimentation resulted in a very simple and tasty addition to our barbeque repertoire. We usually make a pretty large batch when we have people over as they usually go back for seconds and thirds and leftovers are sent home.

Clean the potatoes and rub them with olive oil or use the spray. Place on a sheet pan and bake for 1 hour or until a fork or knife easily pierces to the center. Let potatoes cool just enough so that you can handle them.

Cut potatoes into bit sized pieces leaving the skin on. In a large bowl combine the potatoes, bacon, sour cream, and cheddar cheese. Add more or less sour cream to reach desired consistency. (I like mine on the “wetter” side.) Mix until just combined. Add salt and pepper to taste. Keep warm but not too hot until ready to serve.

You really do want to make a little bit more than you think you will need. I guarantee this dish will disappear from the table quickly but I will let you decide that for yourself 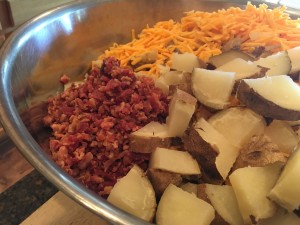 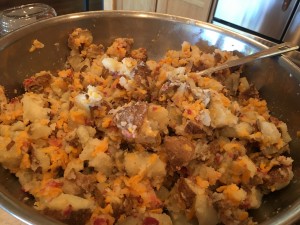 I’m Shirl and I’m part of the Tillie Moon trio. The other two partners are my sister, Judy (13 years my senior), and her daughter, Jen (10 years my junior). Together we make up one terrific team. Each of us has our own singular talents and skills and what one of us may lack, the other two more than make up for. Read More
error: Content is protected !!